Sudden equipment failure can be avoided

Download PDF
This document will show how these pulses interact with each other and create what is known as harmonic distortion.  In the real world, there are many different types of electrical loads on any electrical service. Industrial application have pumps, compressors, motors, controllers, welders, as an example. In commercial buildings, there are computers, lighting, fax machines, copiers, and more. However, in each case, the basis for their electrical loads is the switch mode power supply. They all use the same power switch control that was first found in computer power supplies. 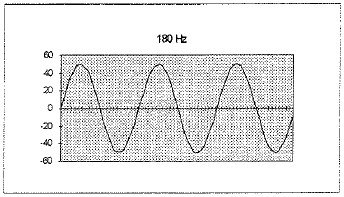 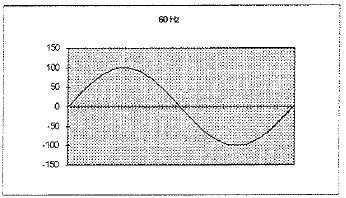 Figure 10 Figure 8
Looking at Figure 10 is a 180 Hz or third harmonic waveform. While in this example it is shown as having the same smooth transition between positive and negative, in real life the wave shape would not be ideal. For the purpose of this example of distortion, let's assume that time is the current drawn by a small network of personal computers (PCS). Single phase loads commonly draw third harmonic currents. In this case the total peak third harmonic current is 45 amps.In the next few pages we will present the concept of distortion.

To start with, look at the wave-form shown in Figure 8. This 60 Hz waveform is the classic linear waveshape the electrical system is normally designed for. It smoothly rises to a maximum positive value and decreases to maximum negative, then back to zero. The time between the start and end of the waveform is 16,667 msec or 60 Hz. In our example, this represents an electric boiler that has a resistive heating element drawing 150 peak amps. 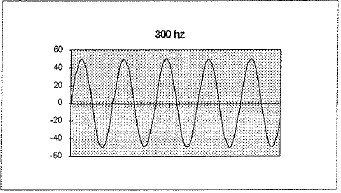 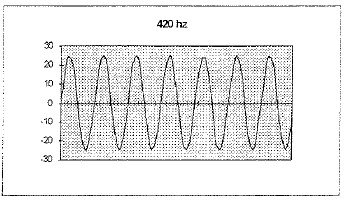 This time we have plugged in a solid state frequency change used in the testing of Figure 11 Resultant Waveform systems bound for Europe. It not only draws current at the 300 Hz fifth but it also draws current at the seventh harmonic of 420 Hz. The frequency converter needs 45 amps of fifth and 25 amps of seventh.The next waveform (figure 2) is at the fifth harmonic or 300 Hz. If you compare the first three figures, you see the higher the harmonic, the more positive to negative cycles in the same period as the original 60 Hz fundamental frequency.

If you look closely at Figures 8 & 9, you can see that there is a negative peak in the third harmonic at the same time the 60 Hz waveform was at positive peak. When you subtract the negative third from the positive first, the total positive peak is lowered.In this electrical system, the different electrical loads are all supplied by one power transformer. Each load has its own circuit breaker but all tie together at the main electrical switchboard. This is where it all starts to form distortion. As the different wires come together, the different frequencies start to add together. As you can see in Figure 12, all of those nice, smooth waveshapes at the different harmonic frequencies have created what is known as current harmonic distortion. 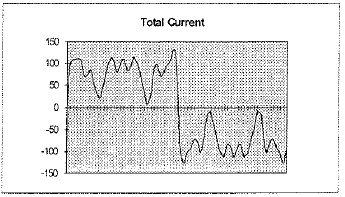 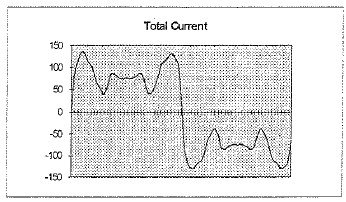 Now add the fifth at the same point and you will see it is positive and therefore causes the total to push back positively. However, the seventh is negative again so the total is pulled lower. This is why harmonic currents distort the waveshape. When you measure all the frequencies a given point on an electrical system, you express the amount of distortion as a percent of Total Harmonic Distortion or THD.

Figure 14
The next waveform (Figure 14) shows what happens when you add just 12 amps of twenty-first harmonic current. Notice how there are now four times where the current is at or close to zero. It looks like three positive pluses followed by three negative ones. If the corresponding voltage distortion is as bad as the current distortion, it would be unusual for most electrical devices to operate from this power source.

Figure 15 shows a 3-D plot of the current actually drawn by one large main frame computer. This one machine with it's many power supplies draws current from the third all the way to the forty-first harmonic. Figure 14 shows the same waveform plotted in the same way (2-D) as our other examples. However, the 3-D view gives some sense that everything is really happening at the same time. The effects of nonlinear currents on power quality are dynamic, and in some cases, very hard to predict.

One very important point we need to make is that high current distortion may not cause high voltage distortion. The electrical load using power distorts the current. Voltage distortion occurs when the power demanded instantaneously exceeds the ability of the power company to deliver. 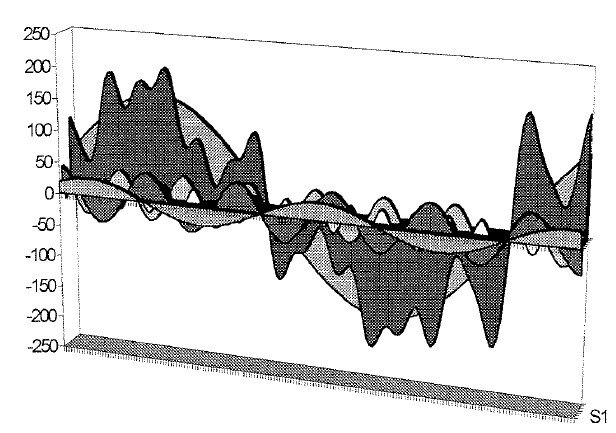 Figure 15
While the power company normally has more than enough power generating capacity, they are limited to how fast they can keep up with very high frequency demands. Remember, until recently, the majority of electrical loads were linear and only asked for current at 60 Hz. Between you and the generators, there are a lot of transmission lines, transformers and other devices. They limit the ability of the utility to source high frequency currents without distortion.

This is not to say that if the example is near a nuclear power plant that there wouldn't be voltage distortion; it would just have a better chance. Companies with large, important data centers learned this years ago and the choice of where to locate a data center was sometimes made based on what transmission lines would feed the site. A 115 kV line would have better voltage that a 4160 volt line.